The arrival of our first grandchildren (twins!) will result in a purchase I never thought I’d make — a family car, henceforth to be known as daddy and grandad’s taxi service.

We have researched this thoroughly, set a budget, and enlisted family members to search for suitable second-hand models. Yet unlike most UK car buyers, we do not intend to use a PCP finance deal (personal contract purchase).

That said, it’s rare actually to buy a car using PCP — most people roll over their finance deals and get a new motor every three years or so.

It’s a route to driving away a new or second-hand car that you’d never be able to afford to buy outright. By signing what is effectively a hire purchase agreement with one massive final payment at the end (the “balloon payment”) drivers are charged interest on the total amount borrowed, but still have to stump up some cash if they want to keep the car.

Years of rock bottom interest rates have fuelled cheap finance deals, but could the cost of living crisis cause the wheels to fall off?

Credit is becoming more expensive on new PCP deals, which now tend to be stretched over four years. Even people who took out contracts in happier times may find that payments of £400 or £500 a month are a growing burden as the cost of rent, mortgages and household bills shoot up — not to mention the rising cost of fuel and car insurance.

“The car industry is utterly reliant on people buying cars they don’t need with money they don’t have,” he says.

Industry statistics are yet to reflect significant consumer distress, but judging by the press releases that have been popping up in my inbox about car finance, many drivers are already feeling the pinch.

If you’ve repaid more than half the total amount outstanding on your PCP contract and can no longer afford it, you can usually hand the car back without penalty. However, finance companies are keen for drivers to find ways of managing repayments and keeping their vehicles.

I wonder how many people fully understood their PCP contracts when they signed the paperwork in the car showroom, and are now tied into deals they’re struggling to afford

Ford Credit, which has 2mn customers using its Options PCP product, says it is trialling a number of solutions offering greater flexibility to customers who are “navigating potential changes to their financial situation”.

A recent press release from a car loan refinancing outfit said a 21-year-old north Londoner reduced the APR on payments for his Mercedes GLA from 26.8 per cent to “just” 12.9 per cent, saving him nearly £8,500 in interest. Goodness knows what his insurance bill is!

I kicked the tyres on all this with Peter Campbell, the FT’s global motor industry correspondent. Though some consumers have signed up to eye-watering deals, he thinks cost of finance is the wrong metric to focus on.

“By far the biggest factor with PCP deals is the rate of depreciation you are financing,” he says, noting that global shocks to the car industry supply chain have caused second-hand car values to soar.

As finance deals are struck based on the value of the car after three or four years, many drivers coming to the end of PCP contracts find they have equity in their vehicle as its value has depreciated less than expected.

He uses the example of a BMW with a sticker price of £40,000. “Let’s assume your contract factors in a £15,000 depreciation over three years — that’s effectively what you’re borrowing to finance,” he says. “Yes, there are interest charges, but if the BMW is worth £35,000 at the end because used car prices are going up, you’re in a good position.”

If you buy the car, this would reduce the value of the “balloon payment”. However, Masson predicts car dealerships will tempt drivers to roll over and take out another PCP on an even flasher motor.

With a long hard road to economic recovery ahead, opting for a smaller, less flashy car with lower monthly payments could be wiser.

Used car prices are starting to dip from historic highs, but Peter thinks the huge rally in prices plus long lead times for new cars will keep residual values ticking over for the next few years.

This could prevent the car finance market from blowing up — but it feels like a happy accident!

I wonder how many people fully understood their PCP contracts when they signed the paperwork in the car showroom, and are now tied into deals they’re struggling to afford.

Dave Ramsey, the US personal finance guru, has a rule of thumb — the total value of all of your vehicles should never be more than half of your annual household income (tell that to the 21-year-old with the Merc).

Of course, I expect a fair few FT Money readers are prudent members of the Bangernomics school, using cash, cheaper personal loans or even 0 per cent credit cards to finance their vehicle purchases.

But I need look no further than my inbox for another accelerating trend for those who wish to purchase an electric vehicle (EV). 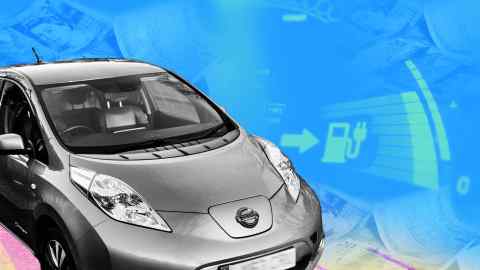 EVs are expensive, but a growing number of employers offer staff the chance to lease one using salary sacrifice schemes.

Paying for a green car using their gross, pre-tax income could save employees hundreds of pounds in income tax and national insurance payments every month — an attractive prospect as tax thresholds enter the deep freeze. There…

Money making tips: 7 things you can do now to make £700 in December in time for

6 Things You Don’t Need to Buy During a Recession

Tax refunds may be smaller this year. How to ensure you get every dime

My single sister demands we pay part of her vacation bill