High yields and rocketing commodity prices have created a financial “blip” for regenerative farming systems, with margins falling behind those of conventional farms in such an unusual year.

Speaking at Groundswell, Gary Markham, director at Land Family Business, revealed that the four-year average results from the Groundswell benchmarking group showed their costs and output were lower, but margins were slightly higher, by £23/ha.

See also: Regenerative agriculture: What to avoid and how to start

However, the very high yields achieved in the 2021 harvest changed that picture in favour of conventional farming, he added, while current sky-high wheat prices are putting further distance between them.

Regenerative system margins could be almost £500/ha adrift with wheat prices at £300/t, he warned.

“After five years of benchmarking, the story is that regenerative agriculture – if you get it right – is about the same financially,” he said.

“In general, yields have been lower, but that also applies to costs, especially the key one on arable farms, labour and machinery.”

Looking at current high commodity prices, Mr Markham pointed out that a wheat price of £300/t means margins in most regenerative systems slip further, as much as £500/ha lower.

“That shouldn’t be looked at in isolation,” he stressed. “Growers who have moved to regenerative systems have less capital tied up in machinery, have reduced their input and fuel expenditure and use less nitrogen fertiliser in terms of kg/tonne.”

Farming is a long-term game that has always been subject to ups and downs, he added.

“Growers who haven’t implemented any changes should ask themselves how long they can chase the money, given the rising risks of delivering good results.”

Roger Davis, of independent agronomy group Indigro, pointed out that any approach that builds in resilience, reduces reliance on expensive inputs and helps to cut risk is a good business strategy, especially as Basic Payment Scheme reductions and climate change start to bite.

“As with all farming systems, the rewards are greater for those who do it well,” he said.

“Given the challenges that lie ahead for farming, it makes sense to opt for an approach that will give more reliable and consistent profits over time.

“There are also additional rewards likely from a regenerative system – public and private funding options, carbon payments and premium-earning opportunities, to name a few.”

An Indigro survey of 40 farmer clients with an average wheat yield of 8.6t/ha showed higher yields of 9.3t/ha coming from regenerative practices, compared with 8.2t/ha for the rest of the group, he reported.

“Where attention to detail is good and there’s an understanding of where things are going, the results are good.” 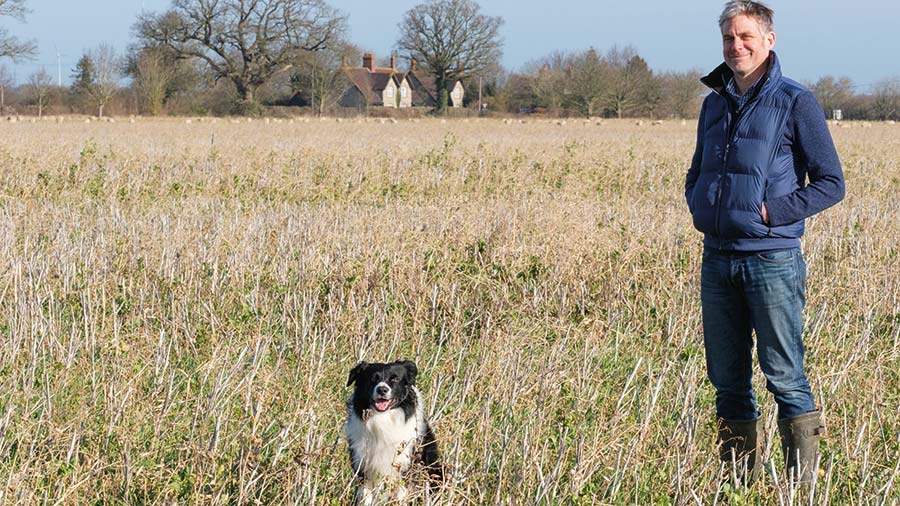 Aiming to grow 10t/ha milling wheat crops, he stressed that efforts to improve the farm’s soils over the past three years are paying off and have earned him the right to start cutting inputs, without compromising performance.

“I don’t accept that there has a to be a yield deficit,” he remarked.

“Yields will always go up and down – 2020 was a horrible year for us – but we are now seeing more margin across the rotation, with the usual blips that have always been associated with farming.”

Mr Purnell emphasised that the only thing he can sell is wheat.

“There may come a time when we can also sell carbon and biodiversity, but for now it’s all about grain. Too much focus on cost cutting isn’t always appropriate.”

His agrochemical spend has come down as the rotation has widened and more spring crops have been introduced, he added.

“Nitrogen use is also falling, even on our milling wheats,” he noted.

“That’s been achieved by improving soils, growing some of our own nitrogen and using it more efficiently.”

He also pointed out that the chances of delivering good results from a high-input high-output system are very different to the reality.

“You have to spend more on inputs, which is not sustainable.”

The next round of parental finance support to adult kids: Help paying the mortgage

The Incredible Upside-Down Market: An Interview With Vineer Bhansali

The Incredible Upside-Down Market: An Interview With Vineer…